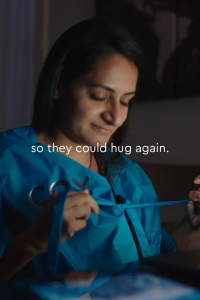 What does a hug mean? During the COVID-19 pandemic, the way people think about hugs has drastically changed. As lockdowns have come and gone, there has been a collective strain on relationships, forcing citizens across the globe to limit their connections with loved ones. Immigrants in the U.S. have been particularly affected by this separation. Even beyond travel restrictions, obstacles like financial burdens, work engagements, political instability, and racism all play key roles in preventing them from returning home.

While video calls certainly help, a new three-part documentary-style campaign from COX Communications shows us that physical touch is irreplaceable. COX Communications sent Wi-Fi enabled hug vests to three U.S. immigrants from three different countries so that they could share a hug with their loved ones back home. The campaign has a clear message: that technology can mend the pain caused by distance.

“10 years ago, I did not know what a hug could really mean. But today, it means everything,” Rashvinda, who emigrated from Malaysia, expresses in one of the videos. Let’s take a look…

U.S. production company Picture North teamed up with three other production service companies, Nicaragua’s Goodgate Productions, Malaysia’s Passion Pictures, and Russia’s Bazelevs, to capture each story.  It’s rare that four international production companies unite to produce a single campaign – another example of how technology can bring us closer together.

The campaign is intimate and personal, creating an emotional connection with the viewer immediately. To accomplish this, the production teams had to maintain a cohesive look while operating thousands of miles apart. To preserve the authenticity of the reactions, the hugs had to be captured live with two production units coordinating via multiple remote video streams across several time zones.

“There was a moment before the shoot where we gathered all the producers on a single zoom call to tech-check the vests. It was 5 AM in Los Angeles, 7 AM in Nicaragua, 4 PM in St. Petersburg, and 9 PM in Kuala Lumpur. We filmed for three days, but it felt like six because of how long the days became. After juggling all those details in so many different languages, it was so rewarding to see these guys wearing the vests and reconnecting in this unusual way. I’m very grateful for the opportunity to share their stories, especially as an immigrant myself,” said Martin Rodahl, Director and Executive Producer.

Here is a look at another spot in this unique and heartwarming campaign:

Despite the tough logistics, everyone is satisfied with the outcome.

Executive Producer Neha Schultz comments, “With our experience producing across the globe, Picture North was thrilled to partner with FCB on this campaign. Director Martin Rodahl hand-selected the right international creative partners and delivered cohesive and beautiful visuals with productions units spanning 4 countries. He’s also a master of capturing authentic moments with real people and found a way for emotions and human connection to transcend technology and time zones. The result is a campaign that feels both elevated and full of heart.”

This third piece will warm your heart right up, here it is…

The shoot took place over the course of three days in Los Angeles and New Orleans domestically and Malaysia, Nicaragua, and Russia internationally.