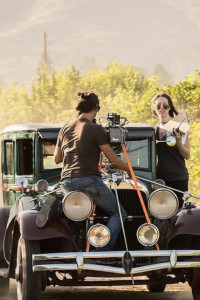 Award winning director Meg Gàmez has joined SEED Media Arts for exclusive representation after owning, directing, and serving as Executive Producer at her own production company for several years. A first-generation Hispanic American, she was raised just outside Los Angeles. Meg grew up on the backlots of Hollywood learning from her father, a blockbuster prop fabricator, where she developed an affinity toward the importance of impeccable design and how that relates to good filmmaking, an affinity that is now seen in her unique directing style for visual storytelling and dialogue work.

Her portfolio has been well recognized in the ad community with accolades from Cannes, a Clio Gold, an Art Directors Club Gold, a One Show Pencil, an Addy, and a Silver at Promax/BDA. Her work, created with BBDO Atlanta, “Stop Traffick” for Street Grace, was the Grand Prix winner at 2019 Ad Stars. In 2022, Meg was awarded multiple Telly Awards for her work with KFC, featuring Jack Harlow in “No Place Like Home”.

Here is a look at the impactful “Stop Traffick” for Street Grace:

“Meg has an innate sensibility for narrative, capturing intimate nuance within human interactions and circumstances”, affirms Skillicorn, SEED’s founder. Skillicorn adds “Working with actors or real people, her gift yields intimate, yet powerful and entertaining, storylines, from normal lifestyle situations to fantasy, from humor to documentary work. It’s so authentic it feels like you are right there, within the context of her message.”

Meg’s work can be defined as an intersection of modern meets traditional, with an impeccable grasp on new technology, as can be seen in her visceral camera movements for recent work with brands such as Samsonite. She also commands a highly polished cinematic approach to storytelling, as seen within her collaboration with Zum, the 100% carbon neutral bus service for students. Her ability to merge these two styles creates a memorable outcome that connects with a vast array of target audiences.

EP and managing director, Bradley Johnson, adds, “Meg has already launched an impressive directing career, and we’re excited to further amplify her vision as her work continues to flourish. Meg Gàmez is most certainly one to watch.”