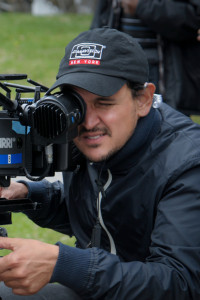 My Big Fat Gypsy Wedding, chimichangas, Phyllis Diller, and the most epic answer in the history of Five Questions with Screen! Yes, that’s all here today as Director David Gil from the esteemed Quriosity Productions roster stopped by Screen today for a thoroughly entertaining round of Five Questions…

SCREEN: Your best summer vacation ever?

DAVID: I grew up in a small southern Arizona town with a big extended family. Pretty much every summer was filled with adventure. We traveled, road tripped, camped, hiked or just spent the summers being kids.  It was all pretty nice.

DAVID: Frankly, I do not pay any attention to the Olympics at all. Despite the consternation of my overly sporty friends and family.

SCREEN: Your favorite restaurant on the planet? What do we order when we go?

DAVID: El Charro Cafe, in Tucson Arizona. You have to order the chimichangas.

DAVID: When I was 16 I worked at Taco Bell for 3 months.  It would have been less time there had my father not forced me to stick with it longer.

[To David’s point, here is a recent clip from the show…]

DAVID: I’m fortunate that in my career I’ve gained the opportunity to meet a great deal of “celebrities” both in entertainment and politics. But if I had to choose, I’d say it was the amazing Phyllis Diller.

Why? I was the director of photography of an early web series about 10 years back. It was called “Family Dinner” and was, as the title would suggest, about a dysfunctional, goof ball family at dinner time…

[Editor’s Note: before we go any further, here is a quick trailer for the series, which you can watch on YouTube]

Mrs. Diller played the matriarch and was just incredible. Now she may not be as “famous” as some of your readers would consider, but to me she was royalty. I grew up watching her because my dad was a big fan.  We watched everything she was on and all the other great shows of the time like Carol Burrentte so I was no stranger to these early queens of comedy.

Gushing aside, working with her was spectacular.  At the time she may have been close to her mid 90’s.  She had trouble walking and needed an assistant.  However when she came in any sign of frailty disappeared and she jumped right into her character and never missed a mark or cue.  We did work around her to give her the most comfortable time and she was as tough as nails and hilarious to boot.

As is the tradition with filming when an actor is finished with their parts the assistant director thanks them and we will all applaud them for their work. I walked over to her and said, “thank you so much it was a real honor to work with you!”  She looked right at me and said, “oh no I’m not done yet.”

Confused, I just told her that we finished all her shots.  I thought she may think that we still need to get reactions or what have you.

“My real work is just starting.” And she gave out that big Phyllis Diller laugh. (google it kids) That literally sent chills down my back and a huge smile to my face.

At that moment her assistant brought a big tray.  On it was a pitcher of martinis and a glass for her, but besides that was a stack of her head shots.

She said to everyone in the room that if they wanted one she would sign them. I was just thrown aback and immediately said “absolutely!”  She remembered my name and took a swig of her martini and went to work signing headshots.  They even asked us if we had any other people who would like one.  I told her my dad was a big fan and it was he who introduced me to being a fan as well.  Her assistant asked me for his address. I thought that maybe they were going to send him a head shot.  Well a few weeks go by and coincidentally on his birthday week he did receive something.  It wasn’t just a head shot but a signed copy of her biography, “Lampshade in a Whorehouse.”

What a class act.  Now if some young celebrity did that at the end of their shoot I may think they were just full of themselves, but if you know her journey and the pioneer who Phyllis Diller was, then that was a once in a lifetime moment.  And yes her headshot still hangs on my wall. One of only two signed headshots I own, right next to Cloris Leachman who was also on a later episode. She flashed everyone her bra, but that’s another story….

Click here for the latest work from David Gil and the team at Quriosity.