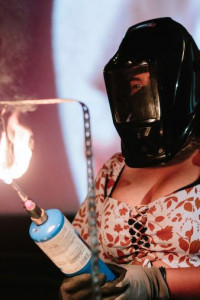 They came. They created. They destroyed.

The fourth annual immersive event “Destroy Your Art” welcomed an enthusiastic crowd and four brave filmmakers to the historic Music Box Theatre on Thursday, August 25th. The Chicago spectacle that marries film and performance art for a completely unique experience that’s impossible to replicate, returned for the first time since 2019. And the title “Destroy Your Art” describes exactly what this event entails: Following the premiere of each film, the art is gone forever, as film hard drives are burned to unrecognizability by blowtorch at the hands of the respective filmmakers.

SCREEN has the photos of this destruction just for you, courtesy of co-founders Rebecca Fons, Jack Newell, and Justine Bursoni Photography…

How the Destruction Began

Co-founded by Rebecca Fons and Jack C. Newell, DESTROY YOUR ART invites four diverse Chicago-based filmmakers to make original short films of five minutes or less and then destroy them in front of the only audience to ever see them, giving artists the opportunity to create something unrestrained and impermanent while inviting audiences to experience something intentional and unrepeatable.

This year also marked the first time the event was hosted by the Music Box Theatre.

DESTROY YOUR ART was born out of a desire to explore the permanence of film as well as the impermanence of the audience experience. The event challenges our current obsessions with moments—Snapchat, Instagram stories, while giving artists permission to take risks that they might not otherwise take. What story will you tell when you know it will disappear?

Meet the Four Filmmakers Who Created and Destroyed Their Art

Four diverse artists were selected for this year’s DESTROY YOUR ART. They are…

Dinesh Das Sabu — Dinesh Das Sabu is an independent documentary filmmaker. His work has appeared on PBS, HBO, and at numerous festivals around the world. Dinesh co-produced his feature directorial debut UNBROKEN GLASS with Chicago’s Kartemquin Films, (HOOP DREAMS, The INTERRUPTERS),  where he also served as cinematographer of AMERICAN ARAB (2013). UNBROKEN GLASS won “Best Director” at the 2016 Los Angeles Asia Pacific Film Festival and was broadcast on the 5th season of the World Channel’s America ReFramed. Dinesh was a fellow in Firelight Media’s Documentary Lab in 2014. He graduated from the University of Chicago in 2006 and earned an MFA in Documentary Film and Video from Stanford in 2019. He teaches documentary production as Assistant Professor of Digital Media at Marquette University in Milwaukee, Wisconsin.

Lena Elmeligy — Lena Elmeligy is currently based out of Chicago, where she works in indie film and television. She has served as production manager, producer, social media and campaign manager, writer and director for various independent film productions in Chicago, including her own web series for Open Television. She’s served a leadership role with Mezcla Media Collective, a non-profit hub for non-binary and women filmmakers of color in Chicago, as Mentorship Coordinator. As Mezcla’s Mentorship Coordinator, she created a mentorship program with Northwestern undergraduates and industry professionals in Chicago. Lena remains passionate about collaborating with community organisations that incorporate art into their social justice and healing justice practices.

Christopher Rejano — Born and raised in the shadows of Detroit, Rejano was influenced at a young age by MTV, skateboard videos and 90s American independent film. His background is heavily steeped in feature film and short form narrative often based in Chicago and the surrounding Great Lakes and Midwest region. Much of his independent feature film work like KNIVES AND SKIN, NIGHT’S END, DREAMING GRANT AVE and SIGNATURE MOVE has been shown at Sundance Film Festival, Berlinale, SXSW and Tribeca Film Festival. Rejano has also been selected for Film 50: Chicago’s Screen Gems three times. In between long form narrative projects Rejano works on commercials, music videos and has also worked as a 2nd Unit Director of Photography on studio projects such as “Lovecraft Country” and the recent Jordan Peele production, CANDYMAN.

Yanyi Xie – Yanyi is a documentary filmmaker based in Chicago, IL. Yanyi recently graduated from the Documentary Media MFA program at Northwestern University. She also holds a BS degree in Media and Cinema Studies from University of Illinois at Urbana-Champaign. Being a “resident alien” for almost a third of her life, Yanyi’s practice has allowed her to observe and build connections in a society that is different from her own while simultaneously in a marginalised position. The observations from documentary practice have trained her to see everyday objects and events. Her fictional and experimental filmmaking also focuses on that, finding stories and poetry in the mundane nuisances. Yanyi’s works focus on topics of gender and cultural identities, some inspired from personal experience. She aims to document individuals’ experience, relations, and emotions through image-making, to emphasise the power of personal within a broader social/cultural context.

For images from and information on past events, visit destroyyourart.com

Get to Know the Creators of Destroy Your Art…

Rebecca Fons is Director of Programming at the Gene Siskel Film Center, a public program of the School of the Art Institute of Chicago, and serves as the Development and Programming Director for the historic Iowa Theater in her hometown of Winterset, IA. Rebecca previously served as Programming Director for FilmScene in Iowa City, IA; Director of Film at the John and Nancy Hughes Theater in Lake Forest, IL; and as Education Director for The Chicago International Film Festival for nearly a decade. Rebecca received her MA from Columbia College Chicago and BA from the University of Iowa.

Jack C. Newell is a writer, director, producer, actor, and public artist. He is the co-creator of Destroy Your Art, and the co-creator of the public art project, The Wabash Lights and created The Second City Film School at The Second City. His feature film credits span genres from the comedies including Monuments, Open Tables, and Hope Springs Eternal to the documentaries, 42 Grams, How (not) to Build a School in Haiti, and America’s First. His films have screened theatrical in the US and internationally and have been featured at various film festivals, including the Austin Film Festival, Sidewalk Film Festival, Chicago International Film Festival, and have premiered on Netflix, Amazon, and Hulu.

Thanks again to Justine Bursoni Photography for the superb photos! Check back here at SCREEN for updates on the latest in film news in Chicago. You can also click right here to subscribe to our weekly email newsletter.