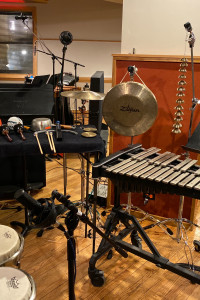 According to the Third Coast website, the songs are “portraits of timeless character types that appear in stories, legends, and myths throughout the world.” According to Lackey, who worked with independent engineer Dan Nichols and Cedille Records house engineer Bill Maylone to complete the pictures, the individual compositions have a way of reflecting moods that is “almost cinematic.”

“It opens with ‘The Rebel’, which is very high energy,” he says. “‘The Sage’ is really creepy and eerie. ‘The Jester’ has a duck whistle, and there’s a jaw harp and bamboo sticks that they bang on their legs. When you listen to it, it’s hard not to laugh.”

Behind the scenes of Archetypes

Lackey and crew recorded Archetypes in Studio Four, CRC’s largest music room, on the first floor. Divided into three compartments, he says that the space is uniquely designed to complement the album’s instrumentation.

“There’s one big room with wooden floors and lots of reflections so things sound really live, and that’s good for percussion and strings,” he explains. “Going from left to right, it gets progressively more dead, and the floor is carpet.”

The size also helped accommodate the arsenal of “20 or more” B&K, Neumann, Royer and Sony microphones that were running “at any given point.”

After recording at CRC, Third Coast’s David Skidmore described the location as “the perfect place to capture our classical albums.”

“CRC is a legendary studio for a reason: it’s an amazing place to create music,” Skidmore says. “Not only does it have all the gear you could possibly hope for, everyone who works there is a pro, and they’re great to work with.”

But Lackey credits the “super-talented” and “super-friendly” artists for Archetypes’ success. “They make the job of the engineer easy,” he says. He was particularly impressed with the members of Third Coast — who know how to play “every percussion instrument under the sun” — for prevailing over a unique logistical hurdle.

“They each had their own station with a marimba or vibes or xylophone and a table full of random percussion instruments,” he recalls. “The biggest challenge was the fact that, for each song, they were moving around from station to station. They move very fast.”

Besides helping to secure the Grammy accolades for Archetypes, CRC worked on Jennifer Hudson’s Respect, which was nominated for Best Compilation Soundtrack For Visual Media.