When IATSE and AMPTP negotiators reached an agreement last month, most television and film professionals and aficionados breathed a sigh of relief and moved on to the next headline on their news feed. However, it might be time to hold that breath once again. The final step in this process is for IATSE members to vote to approve the new agreement. While casual observers may have considered that vote to be simply a formality, member approval may not be as probable as some might have expected. In fact, sources tell SCREEN “the vote could go either way” and the outcome is very much up in the air, as IATSE members cast their votes this weekend.

As for the timeline of the days ahead, the 60,000 members of IATSE are expected to find ballots in their inboxes Friday around 8 a.m. Central / 9 a.m. Eastern. Similar to the massive strike authorization vote of early October, most members will likely vote early. However, digital voting will run until 11:59 p.m. Eastern on Sunday, November 14th. Results of the vote are expected on Monday.

Union Leaders Make Their Pitch for a “Yes” Vote from Members

“Our resolve and our demonstrated willingness to walk off the job took management by surprise and was ultimately what forced the producers to finally move on our central issues after months of talks,” declares IATSE leadership in a video pitch to union members to vote “Yes” on the new deal.

You can click here to watch the full video from IATSE leadership on Deadline.

“The new contract is overwhelmingly endorsed because it provides extraordinary gains in all our priority areas and no reductions to existing benefits or working conditions,” a calm voiceover continues as the logo of the 13 Hollywood logos fill the screen. “We urge you to vote Yes.”

Why IATSE Members May Vote “No”

The sentiment among some members is that their leaders failed to fully capitalize on the strike threat, and there is a hope that rejecting the proposed agreement would force the leadership to seek greater concessions, which would include further curtailing brutally long hours on set.

IATSE Local 80 member Brandy Tannahill organized an Inter-Local IATSE Town Hall for members earlier this week and also offered her opinion in the article “Why I’m Voting No on the IATSE Hollywood Basic Tentative Agreement” in the publication LaborNotes.

Tannahill explains in this interview, “A significant gain in this contract is that our lowest-paid members were getting a $10-an-hour raise to go from $16 an hour to something like $26. In talking to Local 871 members, it seems the general feeling is that they don’t want less than $30. I’m sure there were people who were thinking, ‘Well, the contract isn’t that great for me, but if I get someone a living wage, then we should lift up our brothers and sisters. Well, if our brothers and sisters don’t feel that’s what they need, then don’t vote yes on their behalf!'” You can click here to read Tannahill’s complete interview in LaborNotes.

“We revved everyone up, and they were willing to put it on the line,” said DeJon Ellis Jr., a business representative with IATSE Local 80, in an interview with Variety. “It’s part of the great awakening of the American worker. They see the profits people are making in this industry, and our members feel they deserve more. I think it’s going to be a close tally.”

IATSE Members Remain on the Fence

Jim Plannette, an 81-year-old gaffer whose credits include Ocean’s Eleven, told Variety he was “torn” about the vote, noting that rejecting the deal could easily lead to a work stoppage that would last through the holidays. A strike would not only end paychecks, but in most of the country, workers would not get unemployment.

“I don’t like the new contract,” Plannette told Variety, “but I’m not sure this is the time to have a strike.”

On the other hand, Michael Piotrowski, a veteran sound mixer, said he will vote yes, and that most of the people he works with are also in favor. “It’s a good deal for us,” he said. “I would have welcomed a strike if they didn’t come to an agreement. But I think the agreement they reached was something we can all work with and build for the future.”

It’s important to note that in the event IATSE members vote “No” on the proposed agreement this weekend, it’s not as if a strike would begin on Monday. A “No” vote from members would instead send IATSE and AMPTP negotiators back to the bargaining table. However, the fact is AMPTP and the producers could legally refuse to return to those negotiations if they wanted to, in response to a rejection of the new deal.

Needless to say, the stakes of this weekend’s vote are very high.

Check back here at SCREEN as results of this critical IATSE member vote is announced in the days ahead. 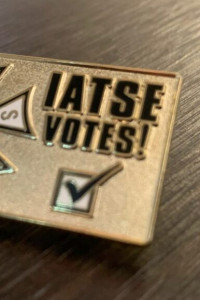 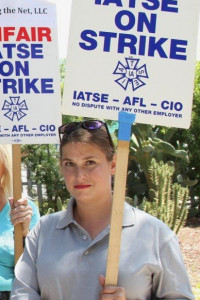