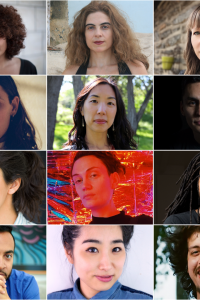 The nonprofit Sundance Institute announced today the names of the mediamakers selected for the new Humanities Sustainability Fellowship, a year-long program providing 20 U.S.-based under-resourced nonfiction mediamakers whose work and livelihood have been grossly affected by the pandemic with direct, unrestricted stipends to supplement their income. Funded by the National Endowment for the Humanities (NEH), each Fellow will receive $60,000 in installments over the course of 12 months, along with the support from paid humanities advisors who will guide through the granting term (April 2022–March 2023) with mentorship, project advice, and other tailored non-financial support to deepen the humanities content and approach of the work. Fellows will also be offered professional development opportunities throughout the term, including a Creator+ Collab membership.

Led by Hajnal Molnar-Szakacs, Director of Institute Granting, the Fellowship selected individuals at all phases of their careers producing and/or directing humanities-focused feature-length documentary films and nonfiction emerging media. The cohort includes 10% lifelong career mediamakers, 60% mid-career and 30% early career. The Fellows are based in New York, California, Wisconsin, Illinois, Puerto Rico and Missouri and at the time of application their current projects were primarily in production (55%) with 30% in development and 15% in post-production. The Fellows selected identify as 70% female, 15% male and 15% nonbinary–they are 10% African American, 15% Asian, 15% Biracial, 25% Caucasian, 5% Latinx, 15% Middle Eastern, and 10% Native American.

“This fellowship is a bold rethinking of what supporting artistic practice can look like, and we are so honored to be one of three nonprofit organizations selected by the National Endowment for the Humanities in piloting it,” said Carrie Lozano, Director, Documentary Film and Artist Programs. “While project-based funding will always remain core to our work, direct individual support is another element in our mission to expand the community we serve and explore new ways to serve mediamakers. Two years into the pandemic, there’s been a shift in the national consciousness that recognizes personal stability is deeply intertwined with innovation at work–completing projects and succeeding at taking on additional ones is much harder when you’re under-resourced or stretched thin! Sundance Institute has had a front-row seat to witnessing the challenges those within the nonfiction space have faced in sustaining their creative practice, and as such it’s thrilling to roll out a new funding model for a group of exemplary mediamakers whose careers we want to champion.”

Zack Khalil is a filmmaker and artist from Sault Ste. Marie, Michigan, currently based in Brooklyn, NY.  His work centers indigenous narratives in the present—and looks towards the future—through the use of innovative nonfiction forms. He is a core contributor to New Red Order, a public-secret society dedicated to expanding Indigenous agency.

The rest of the Fellows include…

Elizabeth Ai is a director, producer, and writer. She’s a fellow of Berlinale Talents, Center for Asian American Media, Film Independent, Firelight Media, and Sundance Institute. Elizabeth and her team are currently in production with New Wave and simultaneously developing the dramatic series adaptation.

Nesa Azimi is an independent filmmaker living in New York City. She has worked on staff as a director and producer for Rain Media, PBS Frontline, Fault Lines on Al Jazeera, National Geographic, and the Ciné Institute of Haiti. Driver will be her first feature film.

Zaina Bseiso is a filmmaker and curator working in documentary and experimental cinema. She’s interested in diasporic relations to land, mysticism and hope. Her work conflates and contracts sounds, images, gestures and histories to explore the multiple possibilities of Return. Zaina’s practice traverses among Egypt, Palestine, Cuba and the US.

William D. Caballero is a Los Angeles-based filmmaker, multimedia storyteller, 2018 Guggenheim Fellow, and 2021 Creative Capital Award recipient. Caballero’s animated documentaries have debuted at the 2022 and 2017 Sundance Film Festival, 2013 Slamdance Film Festival, the Museum of Modern Art, and on major networks, such as HBO, PBS, and Univision.

Amber Fares is an award winning director, producer and cinematographer. She directed and produced Speed Sisters (Netflix 2015), co-directed Convergence (Netflix 2021), was cinematographer on Boycott (2021) and co-produced The Judge (PBS 2017), which won a Peabody Award. Amber is a Sundance Momentum Fellow (2019) and Sundance Editing + Story Lab Fellow (2014).

Ro Haber is an aesthetically-minded Writer and Director who works in narrative and doc. They are working on a cyberfeminist horror retelling of the Frankenstein story, Shell.ai, which is being produced by Seaview, and the SFFILM Rainin winner, Since I Laid My Burden Down by Brontez Purnell and Savannah Knoop. They are interested in transness, futurity, and the American South.

Kathy Huang is a documentary filmmaker based in Los Angeles whose work explores issues of identity and belonging around the world, from transgender women searching for love in Indonesia to African migrants making their way in China. My Uncle the Fugitive is her first foray into personal, investigative storytelling.

Immy Humes is an Oscar-nominated filmmaker who explores social and political issues of race, gender, and class through the prism of real stories about unconventional and complicated people. A native and lifelong New Yorker, she is currently working on a portrait of the late great NYC filmmaker Shirley Clarke.

Christine Mladic Janney is an award-winning filmmaker and media anthropologist. A Sociocultural Anthropology PhD, she has conducted research in and about Peru for over 10 years. Her latest project is a film about Nora de Izcue, Peru’s first woman film director, and Nora’s influence on Peruvian and Latin American cinema.

Jackson Kroopf is a filmmaker and educator from Los Angeles. His films explore auto-mythology, healing through creative expression, and radical approaches to collaboration. He works in both scripted and documentary, but usually somewhere in between. He is currently at work on his debut, hybrid feature on the art of survival.

Marlene McCurtis is a documentary producer and director. She has directed series for A&E, The Discovery Channel, and NatGeo. Wednesdays in Mississippi is her first documentary feature film. Marlene has directed several short films and is an alum Fellow of the Firelight Media Documentary Lab.

Marlo Poras is a documentary filmmaker whose work has aired on HBO and PBS. Her films Mai’s America, Run Granny Run, and The Mosuo Sisters have traveled to festivals worldwide and won numerous awards, including two Audience Awards for Feature Documentary at SXSW and Best Feature Documentary from the IDA.

Yuko Torihara is a Tokyo-born filmmaker, actor, photographer, producer based in NYC.

Kevin D. Wong is a Bay Area-based director, editor, and producer.  He was a 2016 BAVC National Media Maker fellow and is currently an SFFilm Filmhouse resident.  His short’s have won several awards including the Loni Ding award for social justice documentary, played numerous festivals and been distributed by PBS.

Funding for the Humanities Sustainability Fellowships has been provided by NEH through the American Rescue Plan, which is providing economic relief to a wide swath of Americans. Firelight Media and the Independent Television Service are also launching parallel initiatives that will greatly expand the nonfiction field’s humanities-based work.