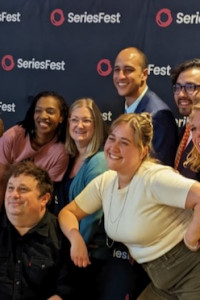 Is Chicago’s next great comedy television series right around the corner? The Pitch-A-Thon initiative, powered by Denver/West Coast-based SeriesFest, Second City, and IFA Chicago is dedicated to discovering and nurturing the most promising independent episodic creators. The winner of the inaugural Chicago Pitch-A-Thon has been announced. Fat Jesus from Kyle Leland was chosen by a panel of experts and SCREEN is here to bring you an exclusive chat with the director and a look ahead to the promising episodic.

First things first, the winning pitch receives a badge to SeriesFest Season 8 coming up in Denver this May, a one-on-one mentorship meeting with an industry professional to further project development, and a $500 cash prize. The Pitch-A-Thon Chicago panel of judges included Sarah Minnie, Head of Artist Development & Production for OPENTV, Jack Katkavich of the Documentary & Advertising arm at Propagate, Screenwriter LeLe Park, and John Bosher, Co-Founder of Throughline Films.

“This is the first time that SeriesFest has launched this program in Chicago,” IFA Co-Founder Angie Gaffney shared with SCREEN. “Their track record combined with the strength of Second City and IFA Chicago make for a really unique partnership; connecting Chicago’s incredible comedic history with a budding pipeline for independent episodic creators. The first iteration of Pitch-A-Thon: Chicago was a success, and we look forward to refining, building, and growing from here.”

So Who Is Fat Jesus?

Creator Kyle Leland sat down with SCREEN to bring you a closer look at his newly crowned episodic. “My comedy TV pitch has three central characters that the story crosscuts between,” Kyle shared with SCREEN. “I don’t want to give too much away, but I can tell you that the title character is your average Joe who represents the person in all of us who feels their life didn’t go the way they were hoping, and has settled in mediocrity. His name is Zach and he’s lost his true love, his friends, and his career. At a moment where he feels stuck in a life without significance, a strange turn of events suddenly puts him into the position of embodying the most famous being in all of human history.”

“Taking part in Pitch-A-Thon was an amazing experience all around and meant a lot to me,” Leland declared to SCREEN. “Not only did it give me some confidence and validation as a writer, but performing the pitch in front of an audience taught me a lot about what ideas worked best.”

“I’ve been in this industry for over a decade and still could use all the guidance I can get, so this was yet another IFA event that was exactly what I needed. The people at SeriesFest were incredibly kind and let us into their family – I cannot wait to see what they have in store at the festival in May.”

So What’s Next for Fat Jesus?

And now the victorious pitch forges ahead on the path to production of a pilot. “I’ve written a few drafts of the Pilot, but I’m still getting notes from peers to make it better, and I have more pitch material to put together for upcoming meetings,” creator Kyle Leland shared with SCREEN. “This TV project still needs a star and a lot of money, but for now, SeriesFest is setting me up with meetings and mentorships so the future is lookin’ good! I just plan to get the pitch in as many doors as I can until someone likes it enough to say yes – SeriesFest and IFA have made that a possibility.”

A Chicago Filmmaker Through and Through

For a bit more about this promising Windy City writer and director, here is his “official” bio from the competition: Kyle grew up in Boys Town, Chicago, studying film at an early age and spending summers at Second City bootcamps. At his Catholic high school, his first documentaries about psychedelic mushrooms didn’t go over well with the priests in charge of the film program, but his classmates loved them. Kyle worked on major studio productions as a PA for 10 years while also shooting and editing local ads and corporate videos. He wrote and directed Chicago’s first 48hr Film Project to win internationally and screen at the Cannes Film Festival. Since then, he’s produced 3 award-winning short films, and has 2 new web series releasing this year. Kyle also loves coffee ice cream and has never gone ice skating.

Congratulations to the other contestants in Pitch-A-Thon Chicago: The System by Frank Caeti, Gumbo from Jeri Marshall, Justin Fullerton’s The A.C., and Team Building from Rosie Moan & Cristy Mercier…

IFA Co-Founder Gaffney, who has enjoyed success in the comedy genre herself of late, producing Jack Newell’s award-winning feature Monuments, shared her take on Leland’s pilot pitch. “Fat Jesus is hilarious and poignant and satirizes societal ideologies around religion from someone who grew up immersed in it. Using comedy to make light of difficult conversations, while combining it with rich, dynamic characters, is an incredible tool for progressive change and the challenging of societal norms. Also, it’s just wildly entertaining and a great idea.”

Wrapping up the conversation, Gaffney declared to SCREEN, “Speaking personally, the thing I loved about all of the pitches was that every creator brought themselves into the story: they drew from personal experience, their culture and identity, things that made them laugh, things that they loved. Every creator who participated in the event gave themselves fully to the opportunity, and were very receptive to feedback in front of a large audience – which is not an easy task. It’s incredibly inspiring to see creators feel so passionately about their work, and honor themselves and their art by committing fully to the craft.”