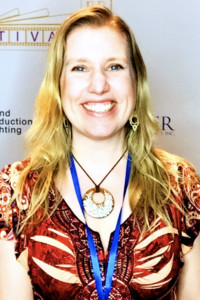 It’s been a sensational summer so far for Wendy Roderweiss. Her Chicago-made pilot Inferno has been snapped up by RokuChannel, and hope is high for the future of the series. Wendy also has a new feature film project coming together nicely. Wendy graciously stopped by SCREEN to tell us all about it…

SCREEN: Wendy, congratulations on the news! What does this new relationship with Roku mean to you?

WENDY: It means that we have started to turn the corner for indie episodics. The industry doesn’t quite know what to do with pilots and distribution on streamers like RokuChannel is a real step forward. For me and all of the amazing people who worked on the pilot, having distribution on a major platform gives people access to our work on a new level. This pilot was made for a fraction of what network shows cost, and it’s on Roku next to Friday Night Lights and Downton Abbey. And it’s FREE so anyone can watch it.

In Inferno, a compassionate would-be attorney is stuck working at a firm of morally depraved divorce lawyers. He tries to save the vulnerable clients from being cheated, but usually with the opposite result.

SCREEN: How did the Roku opportunity come about?

WENDY: The opportunity came through Stareable Fest. Ajay Kishore, the force behind Stareable, has spent the last several years championing indie episodic content. His mission with Stareable is to connect the content creators with the mainstream industry and the partnership with Roku is one rung in that ladder. When Ajay approached us about submitting Inferno to Roku we weren’t sure if they would want a stand-alone pilot. We saw how multi-episode web series might be a better fit, but they responded right away that they wanted to release it.

SCREEN: What will viewers connect with most in your pilot?

WENDY: Tommy, our main character (played by Josh Bywater, HBO’s Somebody Somewhere), is a compassionate do-gooder who made a mistake, and now he needs a job to save his future. He’s finally offered one but it’s at a firm of morally depraved divorce lawyers, including the owner’s henchman Leonard, played by the incomparable David Pasquesi (Book of Boba Fett). Tommy tries to save the vulnerable clients from being cheated, but usually with the opposite result. He finds himself in an impossible situation that many of us have faced over the past few years— “How do I go on? I must go on.” Oh, did I mention it’s a comedy? If I’ve learned one thing, it’s that you have to find catharsis in laughter. And our cast is amazing. I mean, like seriously just a joy to watch, so that’s worth clicking the link.

SCREEN: What’s next for INFERNO as a possible series?

WENDY: The word on the street is that Roku is launching a legit original content wing. Roku bought the Quibi catalog for a steal when they went under, and they are supposed to develop second seasons for some of those shows. But the rumor is that they are next developing half-hour and hour-long episodics. If we can get enough people to watch the pilot on Roku, and then circle back to them, we are hoping it could lead to a development deal for the first full season. When people see the pilot, the number one question we hear is “What happens next????” Well, if enough people watch the pilot on Roku, maybe they’ll get to find out.

Fun fact: Wendy teaches at DePaul University and much of her production team for Inferno consisted of students in the program.

SCREEN: Wendy, what’s next for you, beyond Inferno?

WENDY: A feature that I wrote earlier this year. I’m in the very early stages of development on a coming-of-age drama set against the backdrop of Chicago’s late 80’s underground music scene about two teenaged best friends. Caterpillar Girls has the coming-of-age elements of Ladybird, the kinship of Booksmart and is what John Hughes movies would have been if a woman had made them. This film is woven into the fabric of the city, so I am hoping to get some Chicago investors involved. And after the recent supreme court rulings, now more than ever, we need films for, by and about women.

Click here to watch Inferno now on RokuChannel. Be sure to check back here at SCREEN Magazine as Inferno continues its pilot path to series. You can also click right here to subscribe to our weekly email newsletter.