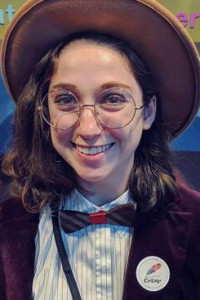 Breaking the Barrier chronicles OnWord Skate Crew making history by building Chicago’s first non-traditional public mobile skatepark during a global pandemic. It is a vulnerable portrait of a variety of different skaters’ experiences at skateparks and how OnWord is providing a safe & inclusive space. We follow the team of skaters around Chicago as they bring the skatepark to neighborhoods that do not have access to skateboarding.

OnWord Skate Co. is a Chicago-based skate crew that prioritizes women, TGNC, & LGBTQ+ skaters of all ages and all levels. Their mission is to teach skatepark building and construction skills as well as free skate lessons, skate meetups, and provide resources for their community of skaters.

The short film recently premiered at The Martin, a queer & women-owned artist-first event space. The event was sold out. Not only was it a screening, but artists and filmmakers got to connect and network.

Breaking the Barrier the short screened at Premiere, DePaul’s film festival at the historic Music Box, on June 3rd. The film opened the show and left the audience with a feel-good feeling. Breaking the Barrier won “Best Documentary” at the festival.

This documentary explores themes of identity, equality, and what it means to build a safe and inclusive space. “This is our opportunity to break the barriers society has unwillingly put onto us and carve a new landscape for the film and skateboarding industry,” said director, Bridget Johnson. Additionally, this is one of the first documentaries that doesn’t just highlight skateboarding but also rollerskating & free skating, emphasizing inclusivity even in the crafting of the film itself.

Building community is the number one priority for the filmmakers and OnWord Skate Co. After the festival circuit, the filmmakers will be traveling to CPS schools & LGBT+ clubs/organizations to showcase the film and provide a thought-provoking discussion about identity & inclusion. “We want to be the representation we never had growing up. I hope this film creates discussions around inclusion, encourages others to share their own stories, and creates actionable steps on how we can change the toxic skate culture.”

Over 95% of skateparks are built by white cishet men. “We are changing that. By building ramps that accommodate people of different skills and sizes/abilities by adjusting their size to be lower for newer skaters, we are making skateparks more accessible. We crafted the rails to be closer to the ground so people who can not ollie/jump can try it for their first time,” explained OnWord co-founder and lead architect, Lid Madrid.

Johnson wanted to create a LGBT+ film that has a happy ending, unlike many LGBT+ films that end tragically. The skaters open up about what skating means to them and their skating origins. To a lot of them, skating is more than a sport or a hobby but a way to express themselves and find a supportive community. Breaking the Barrier is a feel-good movie about creating community and being true to yourself.

This is filmmaker Bridget Johnson’s debut feature under her independent queer production company, Dare to Dream Productions. “Not only does inclusivity start in front of the camera, but it also begins behind it. Our crew is made up of Chicago women and LGBT+ filmmakers. Most of us are skaters too, so, catch us shredding during our lunch break on set. We’re really a family,” describes Johnson.

Producer Lucia Agajanian is one of the few non-skaters on the crew, but she was compelled by the skate crew’s mission. “When I first met with Bridget, I immediately knew this project was going to be special,” Lucia said. “The inclusivity that OnWord is promoting with their accessible skatepark extends into their daily life and the way that they interact with the world. I came on board to help with crowdfunding and pre-production logistics, but I’ve really been made a part of the family.”

What stands out about this film is that the director of this documentary, Bridget Johnson, is a co-founder of OnWord. This is a participatory documentary in which the filmmaker engages with the skaters and shares her own story.

Dare to Dream Productions launched an Indiegogo to raise money for the film. This has been Johnson’s dream since she was 12 years old. “It would mean the world to me if you could donate or share our Indiegogo. When you donate/share you are coming along on our journey. You are becoming part of our community! We have a lot of ways for you to get involved locally or internationally and connect with others from around the world. We can’t do this without you! Thank you so much. Lots of love!” said Johnson.