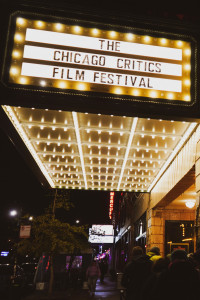 The Chicago Film Critics Association (CFCA), the Chicago-area print, online and broadcast critics group that celebrates the art of film and film criticism, today announces the Audience Award winners following the 9th Chicago Critics Film Festival. Audiences selected Closing Night feature presentation I LOVE MY DAD as winner of the Audience Award for narrative features; the film screened to a sold-out crowd as the festival wrapped up on May 19 at Chicago’s historic Music Box Theatre.

Additionally, 2nd CHANCE, the story of Richard David, the man who invented the concealable bulletproof vest, received the Audience Award for documentary, while two short films earned Audience Award honors from each program: MY DUDUŚ, directed by Tom Krawczyk, and THE SENTENCE OF MICHAEL THOMPSON, directed by Haley Elizabeth Anderson and Kyle Thrash.

Enjoy a preview of the spellbinding Audience Award Winner for Documentary, 2ND CHANCE…

The ninth edition of the festival also boasted the largest crowds to date, proving that filmgoers are ready and eager to return to in-person screenings and the chance to celebrate the best new films premiering in Chicago. Special guests this year included filmmaker Cooper Raiff with opening night selection CHA CHA REAL SMOOTH; documentarian Stefan Forbes with HOLD YOUR FIRE; filmmakers Kristen Abate and Steven Tanenbaum from STRAIGHTEN UP AND FLY RIGHT; a star-studded closing night with filmmaker James Morosini and stars Patton Oswalt, Amy Landecker and Claudia Sulewski in attendance for I LOVE MY DAD; and many more.

The Chicago Critics Film Festival annually features a selection of acclaimed films chosen by members of the Chicago Film Critics Association, a combination of recent festival favorites and as-yet-undistributed works from a variety of filmmakers, from established Oscar winners to talented newcomers. It is the only current example of a major film critics group that hosts its own festival. The tenth edition of the festival will return in May of 2023.