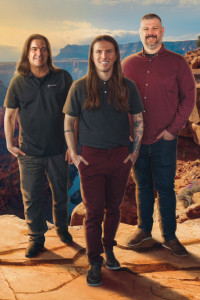 Bounce Sound Studios is the way out of a drag that has been hobbling the post-production industry for decades. Fueled by an inspiration that grew directly within the film and commercial world, the upstart company delivers real-time, sonic expertise over wi-fi connections to locations across the globe. In other words, Bounce Sound Studios is anywhere clients want it to be.

“I noticed over the years how talent didn’t need to come into the studio as often as technology allowed them to record from home,” says Bounce founder Mark Ruff. “When clients started to follow suit, I saw how the brick and mortar model was going the way of Blockbuster.”

Of course, none of this really works unless the people at the controls know what they’re doing. And to that end, Bounce has it pretty well figured out.

Ruff and partner Jason Hoban — along with producer Michael Azzato — perfected their skills while completing thousands of tracks at Chicago Recording Company’s Streeterville location. With former clients like Miller, State Farm, Whirpool, Samsung and dozens more, they wield a combined portfolio that embodies a unique chapter of 21st century media.

But what have they done lately?

Audio post-production spanned half the nation. Voice actor Jeff Berlin read the script in an East Coast studio while Ruff recorded takes in Chicago and the creative team gave direction in Pittsburgh. Producer Snake Roth lent support from a Windy City location, and they all collaborated in real time over Zoom.

“I cut the voiceover into the footage to make sure it timed out properly and then I played it back for everyone,” says Ruff. “If we need to adjust, we do it on the spot.”

According to Ruff, this kind of remote working relationship saves massive time compared to the traditional model.

“In the old days, if there was an after hours change, we’d hustle back to the studio at the mercy of traffic,” he recalls. “Being remote, our commute time is zero. We can react to changes on a dime, saving our clients’ time and money.”

The Bounce team has journeyed through this evolution with support from a pair of clients who have worked with them for more than a decade.

“We want to thank Snake Roth with 9 Rooftops and Scott Mitchel with OKRP for trusting Jason and I enough to bring their business to Bounce in its first year,” says Ruff.

In a slew of work for Beanie Boos created by Chicago digital marketing agency 1o8, Bounce handled sound for imaginary movie-trailers that added cinematic thrills to the collectible toys’ image. The Heist stars Austin the Owl as a lead character who narrowly escapes a room full of lasers with help from Spirit the German Shepherd. The action moves to an up-tempo, contemporary Peter Gunn-style bongo drum and acoustic bass rhythm.

“Whenever a character does something, I created a sound to accompany the action,” he explains. The spot becomes “a little more lively” with his personal renditions of exclamations like “uh-oh,” “argh,” and “woof.”

Ruff recorded the audio on Bounce’s professionally equipped sound booth. Other in-house resources include a foley and a set of full-blown Power Macs.

Ruff clearly enjoys enhancing the work and he has created a win-win situation to help clients get it done. For projects billed as half- and full-day packages, Bounce does not charge additional fees for creating new sounds or using one from the million+ (literally) that they have collected over the years. In addition to sfx, the packages includes talent connections, postings and archives.

Besides helping clients stay within budget, Bounce has upgraded the traditional engineer-and-an-assistant model into a dual-engineer scenario. In some cases, the company can increase the number of workstations dedicated to a project, enabling it to work twice as fast. Most importantly, Bounce runs on a creative spirit that is fully devoted to helping clients reach their goals.