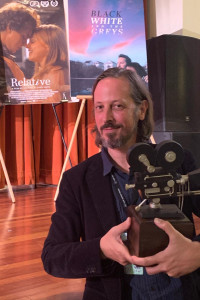 A Chicago indie is celebrating a prestigious win in New York as its theatrical run heats up in the final months of summer. Michael Glover Smith’s fourth feature film, the acclaimed Rogers Park-set dramedy Relative, has won the Best Ensemble Cast award at the 6th annual Festival of Cinema NYC in Queens, which wrapped this past weekend. Representing the film in person for its Closing Night screening at the historic Regal UA Midway theater in Forest Hills were cast members Cameron Scott Roberts (The Walking Dead) and Melissa DuPrey (Grey’s Anatomy) as well as writer/director Smith and costume designer Armani Barron (Rendezvous in Chicago). Relative was competing with 129 other titles from around the world that had screened over the course of the festival’s ten days. It is the second award the film has won for acting following the Best Performance honor bestowed upon the aforementioned Cameron Scott Roberts at the film’s Gasparilla International Film Festival premiere in Tampa in March.

In an exclusive chat with SCREEN, Smith said, “Festival of Cinema NYC gave out awards in over a dozen categories but this was the one that I was really hoping Relative would win. Everyone in our cast busted their asses to get this movie made. These actors all stuck by me even when we had to postpone the shoot for over a year due to the pandemic.”

“By the time the cameras rolled, the entire cast had become a ‘film family’ as tightly knit as the characters who form the Frank family at the center of the movie,” Smith declared to SCREEN. “There are about eight or nine remarkable, truly substantial performances in Relative and I’m just so glad I got to see all of these actors collectively recognized for their hard work.”

Enjoy the trailer for this festival winner right here…

Theatrical Run Heats Up in August and September

Local audiences will have more chances to see Relative as it continues to expand theatrically throughout the Chicago suburbs over the coming weeks. First up is an After Hours Film Society screening at the Tivoli in Downers Grove on Monday, August 22. That screening will be followed by a Q&A with Smith and cast members DuPrey, Elizabeth Stam and Emily Lape. This will be followed by screenings at the Hollywood Palms Cinema in Naperville and the Studio Movie Grill in Wheaton. Smith and some of the film’s ensemble cast plan to be present for those screenings as well.

Additionally, the film will screen theatrically in Indianapolis and Milwaukee and at festivals in Tallahassee, Florida and Statesville, North Carolina.

For the most up-to-date screening info, visit the film’s official website: www.relativemovie.com