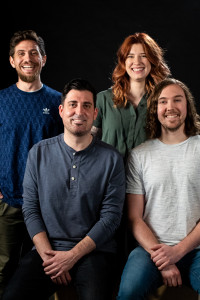 Banner expands roster and capabilities with its production and post production teams. Here’s a look at the latest additions…

Banner president Patrick Dahl says, “Our clients trust Banner to deliver epic content, and we’re able to do that without headaches. We’ve grown exponentially and have been able to help attract top talent that will drive our vision for the future of the company. Most importantly, Moe, Chris, Justine and Luke are genuinely good people who I look forward to collaborating with every day.”

Luke Pollard joins Banner as a Senior Artist, coming from Sarofsky, with stints at Leviathan and Utopic before that. Luke is an established Art Director and Designer who specializes in design-driven production for film and television, working with brands such as Kohler, Verizon, Nike, and Pepsi. Luke’s work ranges from main title sequences for film and commercial art, to concept design and experiential design. He is a highly regarded creative with a wealth of experience as a 3D artist. His career has allowed him to develop important skills that will immediately make an impact for Banner’s client base.

Mo’Tasem Awad is an award winning Filmmaker and Director of Photography who joins banner after spending most of his career traveling the world and developing his craft. Moe most recently took up residency in Jordan where he worked on global brands like Red Bull, Porsche, Netflix and FIFA. Moe’s technical acumen and passion for storytelling have helped establish himself as one of the industry’s rising stars in filmmaking.

Chris Scudder joins the Banner team as an Editor from Leo Burnett’s in-house production group, The Pub. His calm, cool demeanor and passion for his work has not only solidified him as an editor, but has gained the respect and trust from clients and co-workers alike. In his 7 years as an editor, Chris has worked on brands such as Nintendo, Firestone, UHC, McDonalds and Kraft Heinz. Chris brings a wealth of commercial and advertisement expertise to banner.

Justine Burchall is a Cinematographer and Editor who joins the Banner team after building her advertising career as an in-house video creative for boutique marketing agencies where she had the opportunity to work on brands like Marriott, Ritz-Carlton, Madewell and Belvedere. Justine has an affinity for storytelling and her skillset as an experienced shooter, photographer and editor helps expand Banner’s capabilities.