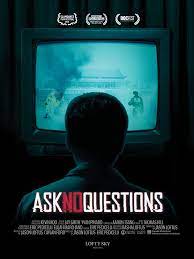 In turns disturbing, insightful, and moving, ASK NO QUESTIONS was described at its Slamdance premiere as a real-life version of BLACK MIRROR. Directed by Jason Loftus and Eric Pedicelli, the documentary shows the dark side of the Chinese government and how they run a vicious propaganda campaign to discredit the spiritual practice of Falun Gong.

A journalistic true-crime documentary, ASK NO QUESTIONS examines the captivating story of a Chinese state TV insider who is held and forced to accept the state line on a fiery public suicide he believes was a government plot. Evidence is credibly presented, shocking, and thorough, and the investigation leads into allegations of nefarious activity at a governmental scale.

In this quick clip, Loftus talks about his wife receiving threatening calls while he and Pedicelli were filming the documentary:

Please take in the full interview between Screen Magazine Correspondent Joanna Kay and directors Loftus and Pedicelli as they dig into this explosive investigative documentary: https://www.youtube.com/embed/UrRDC1dmEv8

To view ASK NO QUESTIONS now, click here to rent or buy.