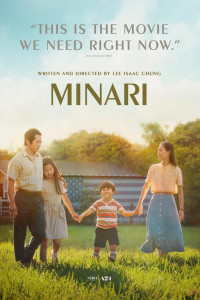 With one of its most diverse lineups, Asian Pop-Up Cinema: Season 12 continues with a drive-in film festival, April 15 – May 2 at The Drive-In at Lincoln Yards, operated by local landmark cinema, Davis Theater.

This season highlights the best of Asian filmmaking, with a lineup of features from Hong Kong, Japan, Taiwan, China, South Korea, India, Indonesia, Vietnam, and Mongolia. In addition to many international and U.S. premieres, the festival will screen five official selections submitted for 2021 Academy Awards consideration.

Oscar-nominated MINARI will have a special screening on April 29 and May 1 at the Drive -In. Lee Isaac Chung’s acclaimed film, nominated for Best Picture, Best Director, Best Original Screenplay, Best Actor, Best Supporting Actress and Best Original Score, tells the story of a Korean family pursuing the American dream on an Arkansas farm. Sponsored by the Consulate General of the Republic of Korea in Chicago, the screening will be free to the public with RSVP.

Programming is selected by Festival Director and Founder Sophia Wong Boccio. “My mission for Asian Pop-Up Cinema has always been to bridge eastern and western culture and expose the general public to stories told by Asian filmmakers,” she said. “Given today’s social and political climate, I’m prouder than ever to be providing the city with an outlet that reinforces the commonalities we all share through a familiar art form like film.”

The drive-in opens with a screening of Centerpiece Film ONE SECOND CHAMPION, following a boxer who is gifted with the ability to see one second into the future. A solo directorial debut from Chiu Sin-hang, this underdog story shows how far a single father would go to gain his son’s respect. Determination is also the central theme in Lik Ho’s I STILL REMEMBER, an inspiring story of a widower teacher and his former student who find solace in the sport of running. Sponsored by HKETO NY, other Hong Kong selections include Closing Night’s READY O/R KNOT, a quirky romantic comedy from first-time director Anselm Chan. When a longtime couple has opposite views on marriage, an outright battle-of-the-sexes ensues with the help of their scheming friends.

While varying in setting and scope, the selected features have a common thread of our shared humanity. Nontraditional family love is explored in the U.S. premiere of DEAR TENANT, from director Cheng Yu-chieh, whose native Taiwan was the first Asian country to legalize same-sex marriage. The perception of time is examined in Chen Yu-hsun’s award-winning MY MISSING VALENTINE, a romantic comedy following a woman who inadvertently skips a day of her own life.

Pre-recorded “Filmmakers’ Talks” will be included in the majority of feature presentations with questionnaires provided by virtual moderators Mark Schilling for Japan, Kevin Ma for Hong Kong, Darcy Paquet for South Korea and Pat McDonald for Taiwan.

THE DRIVE-IN AT LINCOLN YARDS:

The Drive-In at Lincoln Yards is located at 1684 N. Throop Street. Films will be shown at sunset on Thurs/Fri/Sat/Sun nights and will be shown once only.

Tickets are $15 per vehicle @ drive-in.  Sold via https://www.tickettailor.com/events/asianpopupcinema or clicked through each film page’s “Buy Tickets” button. All ticket sales are final, non-refundable and non-exchangeable. All programs are subject to change. For the latest news and up-to-date screening information, subscribe at asianpopupcinema.org/subscribe