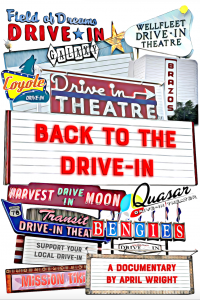 April Wright fell in love with movies growing up north of Chicago where she went to the Waukegan Drive-in, The Grayslake Outdoor, and the Keno across the border in Kenosha, Wisconsin. Wright’s love of movies and of the beloved drive-in movie theatre is evident in her new documentary Back to the Drive-In. The entertaining all-ages film premieres this week in Chicago at the historic Music Box, on Saturday, August 13th and Sunday, August 14th. The film will also park itself in the west Chicagoland area for a weeklong run at Classic Cinemas Charlestowne in St. Charles, Friday, August 12th through Wednesday, August 17th.

How It All Started

After Wright earned her MBA from Northwestern, she moved to Los Angeles and eventually starting making movies. Her first documentary was inspired by her childhood drive-in memories. Few drive-ins remained by the mid-2000s, and she went on a cross-country exploration to find out what happened to them. The result was her award-winning doc Going Attractions: The Definitive Story of the American Drive-in Movie which had a theatrical release on many drive-in (and indoor) screens in 2013.

She made a follow-up documentary Going Attractions: The Definitive Story of the Movie Palace, again returning to her Chicago roots to feature The Uptown Theatre, the Avalon Regal Theatre on the south side, and The Music Box, where the film had its Chicago premiere during a major snowstorm in November of 2019. Thankfully many people braved the weather to come out for this screening where the Music Box’s organist welcomed movie-goers in grand fashion as many movie palaces used to do.

Then came the pandemic, and the whole movie world changed as the once-forgotten drive-in swiftly regained national attention. And there was one person who happened to be very well versed in Hollywood’s new go-to for bringing blockbuster studio movies to the people. Wright’s expertise and voice were suddenly in high demand.

“Little did we know just a few short months after this screening the world would be faced with a global pandemic that would force the closure of movie theatres, and just about everything else… except drive-ins,” Wright shared with SCREEN. “Suddenly, they were the only show in town, not only for movies, but hosting graduations, concerts, weddings, stand-up comedy, churches, dance recitals – you name it!”

Reporters came across April’s Going Attractions drive-in documentary and she was contacted by many reporters from places like Time Magazine, CNN Business, Parade magazine in every major newspaper, all wanting to talk about the drive-in renaissance. “In areas that had torn down their drive-ins, new pop-up drive-ins appeared in parking lots and rooftops, and many people went ‘back to the drive-in’ for the first time in years,” Wright explained to SCREEN. “Many young kids were experiencing drive-ins for the first time – ever!”

“Everyone thought drive-ins were back and doing well, and comparatively, they were,” Wright shared with SCREEN. “However with capacity restrictions, limits on snack bars, additional staffing to help people park and enforce mask rules, additional cleaning requirements, and a lack of new movies from studios, were they making money? Some did, but others were just staying afloat. By the time things slowly start to reopen, drive-ins were coming out of COVID like every other small business – with many challenges.”

Knowing the drive-in community after making her first doc, April had thought about making a new documentary on the topic of drive-ins. Having already covered the history thoroughly, she wanted to show some of the families who own drive-ins and how hard they work to keep them going for their communities. The pandemic added another layer to the story. So April got on the road in Summer of 2021 to make her new film Back to the Drive-In which goes behind the headlines to show the current struggles of the owners, as well as their passion and resilience to keep their drive-ins alive.

April drove cross country visiting eleven unique family-owned drive-ins in eight states, from Los Angeles to Dallas, up to Nebraska, east through Ohio and Illinois, to Buffalo, Cape Cod and Baltimore. One of the drive-ins featured in the doc is the Harvest Moon Twin Drive-in in Gibson City, IL a couple hours south of Chicago.

Your Tickets to the Chicago Premiere

The film is garnering great reviews with its messages of hope and resilience as we all try to get past a difficult time. Back to the Drive-In premieres this week in Chicago at the historic Music Box, on Saturday, August 13th and Sunday, August 14th. The film lands in the west Chicagoland area for a weeklong run at Classic Cinemas Charlestowne in St. Charles, Friday, August 12th through Wednesday, August 17th.