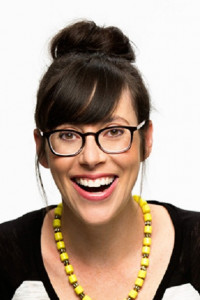 HollyShorts is here and one of the filmmakers starring in front as well as behind the camera is Andrea Rosen. Today in Filmmaker Focus, Andrea chats with SCREEN’s Joanna Kay about her new short THE RAIN PONCHO, which premieres virtually at HollyShorts this Wednesday, November 11th at 7:30 pm Pacific.

You may recognize Andrea as Eileen Jaffee on the Showtime series “Episodes” or from stints on Showtime’s “I’m Dying Up Here,” Netflix comedy “Wet Hot American Summer,” and the award-winning HBO series “Flight of the Conchords.” Rosen also co-created, co-produced and starred in two seasons of my own TV show, a comedy documentary called “Take Me To Your Mother” for NickMom.

Enjoy Joanna’s entertaining interview with Andrea then click here to buy your virtual ticket to watch THE RAIN PONCHO and the entire LGBTQ shorts block at HollyShorts!

In THE RAIN PONCHO, Liz is a high strung, pot smoking therapist. Andrea is a laid back and totally inept hair cutter. The moms worry that their oldest daughter has a secret boyfriend or worse yet, a pimp! They’re shocked to learn that it’s really their youngest daughter who has a big secret. It’s a very stressful day.

The Academy Award Qualifying HollyShorts Film Festival continues through November 15th, offering virtual screenings of outstanding shorts from across the globe. Click here to check out the full schedule and purchase your tickets.