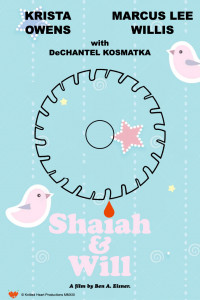 Capturing a single complete scene in one shot is quite an achievement. Capturing an entire feature length film in one shot is nothing short of historic. A single 91-minute take is at the heart of Ben Eisner’s latest feature film SHAIAH AND WILL, which just wrapped an incredibly ambitious shoot in Milwaukee, Wisconsin, and is now heading into post-production. In a SCREEN Magazine Exclusive, Eisner and his team sat down with us to share the details of their daunting endeavor.

“I have never seen a film that is a true “oner” without edits,” Eisner told SCREEN. “I know there have been a handful made over the decades, but the layers complexities among characters and many unexpected twists, I can’t think of another film quite as unique. A lot of people ask me ‘Oh, so it’s like the film 1917, right?’  I say, ‘Sort of. But in this one, there are no camera tricks or wipes intentionally placed to hide edit points. We’re really doing it!’  And believe me when I say this: there is never a dull moment from first frame to last.”

As you might expect, SHAIAH AND WILL centers on the layered and complex relationship of the title couple. After winning his dream job as a commercial airline pilot, Will makes a horrifying mistake while remodeling a nursery for Will and Shaiah’s first baby. Everything they’ve invested into life together hangs in the balance as we join Shaiah & Will for an hour and twenty minutes — captured in one unedited shot.

“When You Don’t Have a Safety Net”: One Unedited 91-Minute Shot

So how in the world do you pull this challenge off? “We jam-packed rehearsals and filming into one week,” Eisner told SCREEN. “Two all-day on location rehearsals, with another studio rehearsal the following day. We filmed three full takes on three consecutive days. The film will be one of those three takes. The fun part about this is that we get to watch the entire film immediately after filming each night, and make notes and adjustments for the next night’s performance.”

“My greatest challenge in making this film is to help actors realize they can’t mess up,” director Eisner explained to SCREEN. “If they know their characters well enough, even when they ‘forget their line,’ they know the gist of what they’re saying and why. Chances are, saying their lines in their own words usually feels more truthful than something I wrote.  When you don’t have a safety net, you have no choice but to just stay in it with your scene partner with no time to think.”

Executive Producer DeChantel Kosmatka added, “What really gets me going is the “all hands on deck” essence of SHAIAH AND WILL. Every person/s on set is vital to the success of this project. SHAIAH AND WILL is it’s own tiny, but mighty ecosystem working together to create our own bubble of “Real Life”. I believe we’ve come to trust one another and it will show in the finished product.”

“Can I get an AMEN! Our protagonist is Female identifying and she doesn’t spend 75 minutes chasing after a boy!,” Producer DeChantel Kosmatka declared to SCREEN. “She’s a real woman, a virtuous woman. You know the type. Has a full time job, supports her parents financially and emotionally, and carries her husband’s fragile ego as a consequence of his coddling parents. Shaiah sets her personal happiness aside, and keeps her heartbreak close to the chest inorder to be the protector- the giver, but now she’s a mother-to-be so sh*t’s got to change! Shaiah represents ALL women.. resilient, tenacious, Kings of their Castle!”

Funny, smart, organized, and capable of more than most, the lead character of Shaiah (pronounced SHY-uh) has lived her entire life solving everyone else’s problems and being the adult in the room. After investing several years into building her dream life with Will, her best friend in the world, everything she dared to dream for seems to hang in the balance, and it is this night that she needs to decide if she is going to keep putting everyone else’s problems first, or decide to start thinking about what she ultimately wants in life. “Shaiah is every woman who has ever felt overwhelmed by the multiple hats worn as a modern day woman,” actor Krista Owens (pictured right) explained to SCREEN. “She is a supportive loving wife, mother, and business woman, with imperfect parents, and flaws and wounds of her own. She is relatable to the masses with a universal appeal and struggle, all captured as we get a glimpse into her life during a traumatic event that reveals, strength, determination and victory if you attempt to change what you refuse to accept.”

Playing opposite Owens is Chicago actor Marcus Lee Willis in the role of Will, whose life is quickly thrown into the balance at the outset of this film. “Playing Will challenges me to understand that we’re only human and even with hard work and dedication, mistakes happen, but that doesn’t mean the end of the everything. You keep faith and accept what is happening and then find another way.“

“In life when the elevator breaks, sometimes you just have to take the stairs.”

This declaration of persistence from Marcus appears to be the mantra of this ambitious endeavor for director Ben Eisner and his team.

“I feel so fortunate to have secured the group of talented filmmakers we have,” Eisner concluded. “There is no weak link in the chain. Every department is led by someone with whom I have tremendous trust and respect for, as they are not only top of the class in their knowledge and craft, they are all lovely people to collaborate and make art with. If you don’t enjoy the people you are making art with, then I see no point in doing it.”

Check back here at Screen Magazine for updates as SHAIAH AND WILL begins its festival run in the months ahead.