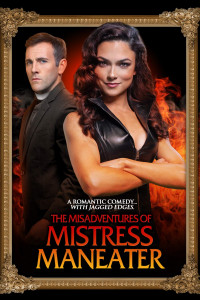 Illinois-Indiana indie THE MISADVENTURES OF MISTRESS MANEATER is riding a successful festival run into its worldwide digital release on Amazon, and here is your first look at the feature from director C.J. Julianus and actor-writer Lorrisa Julianus. The film recently won best comedy feature at the Mile High Film Fest, earned an award of excellence at The IndieFEST Film Awards, and was a finalist at the Burbank International Film Festival. And now, the film is available worldwide for you to enjoy on Amazon Prime, click here to watch today.

“We all need a fun escape, especially a tight story that can fully engage our brains, grab our attention with life-or-death stakes, and take us on a ride,” lead actor and writer Lorrisa Julianus told SCREEN. “I crafted what I’d wish to see – a visually beautiful story that’s hilarious and sexy and exciting, has smarts, but also a heart. As filmmakers and actors, we blew up the saccharine, shallow rom-com standard with intellectual and emotional substance, edge, and enough snark to not take ourselves too seriously. All to make our audience smile and feel a little more hopeful about the world.”

Here is your first look at THE MISADVENTURES OF MISTRESS MANEATER:

In THE MISADVENTURES OF MISTRESS MANEATER, Ava Moriarty, Art History PhD dropout-turned-dominatrix, wants OUT. But there’s no safeword for golden handcuffs. When her mobster ex gives her 30 days to repay a massive loan, she’s forced to agree to one last job – seducing and extorting “Father Dracula,” a small town Episcopal priest. But Father Radovan Markovic brought his own secrets from Serbia, and moonlights as an MMA fighter while unwittingly hiding the world’s greatest lost painting. Not to mention he’s the one hot guy avoiding Ava like loose glitter. Certain he’s embezzling a priceless art collection, will she win his heart only to destroy his life, or doom herself to a custom pair of concrete stilettos?

This passion project was not without challenges, which director Julianus and his team worked together to meet every step of the way. “I’d say that as a start-up company, the fact that Lorrisa & I had to wear at least a dozen hats each, was the most formidable,” Julianus told SCREEN. “Pre-production was a solid seven months of preparation, and during that time, Lorrisa and I rehabbed and flipped a house to make the not-insignificant amount of money we needed for our budget. As every film maker knows, securing funds can be a huge nightmare. We decided early on that we loathed the idea of using crowd funding. To us, that was the same thing as telling investors, “RUN”! We strongly felt that we could make it our way, because of the extensive ability and experience Lorrisa and I share in film, television, and theatre. We also reasoned that when we made our movie on time, on budget, and with our own skin in the game, that finding outside funding for future projects would be much easier. It was a long – but ultimately fulfilling – journey that gave us a real eye-opener of an education that few people ever get to experience.”

What’s next for Lorrisa and C.J. Julianus? The duo is looking ahead to a potential feature next summer. “You rarely hear of a sequel in indie film, but like my two main characters, my heart overruled my logical producer’s head, and I’m deep inside a feature length sequel with all the mystery, romance, comedy, and action of the first. Ideally, I’d love to film in a magnificent, historic Midwest hotel next summer, if feasible with COVID restrictions. I tend to be overly fond of large casts and sweeping set pieces with too many extras. On our last day of post together for THE MISADVENTURES OF MISTRESS MANEATER, our wonderful DP/colorist/co-producer John Wesley Norton remarked to me, ‘I’d love to see you write a small movie, Lorrisa.'”

“I suppressed a smirk and said, ‘This was my small movie, John.'”

THE MISADVENTURES OF MISTRESS MANEATER is now available on Amazon Prime, click here to watch today.