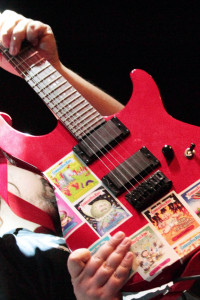 The Battle for Hope — an annual Chicago advertising live music competition — returns to the Cubby Bear for its ninth run on May 12. A fundraiser for the Off The Street Club, the oldest boys and girls club in Chicago, this year’s event will feature bands made up of employees from iCrossing, AbelsonTaylor, Epsilon, Edelman and FCB Chicago.

An act called Friends From Work featuring members from Cramer-Krasselt, Doner, and CG Life will launch the festivities.

The Battle for Hope’s appeal is legendary. Founded in 2013 by Sujal Patel, Kris English, and Simon Kissler (all of whom worked for Digitas at the time), it raises money for a nonprofit that helps kids on Chicago’s West Side while packing the house with a sold-out crowd of coworkers, fans, friends, creative pros and music industry judges.

Performers have also been known to leap off the stage and into the crowd.

A panel of judges determines the winner by totaling points awarded in four categories. Musicianship and performance are each worth up to 15 points; audience reaction and the “x-factor” are worth up to five. This year’s judges include Chicago Recording Company’s Dave Dakich and Grammy-winning Chicago-based jazz musician Frank Catalano. Previous winning bands include AbelsonTaylor, Epsilon (Conversant) and Cramer-Krasselt.

The amount raised for Off The Street Club generally approaches $100K and all of it goes to the organization’s Summer Camps in Wheaton.