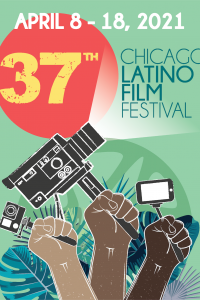 Presented by Corona Extra and produced by the International Latino Cultural Center of Chicago, the Chicago Latino Film Festival, which took place April 8-18, adopted a hybrid model of in-person Drive-In and online screenings, the latter available to residents of Illinois and, with some exceptions, the Midwest states of Minnesota, Iowa, Wisconsin, Michigan and Indiana through Eventive’s virtual platform. The slate of 45 features and 36 shorts from Latin America, Spain, Portugal and the United States, included ten North American premieres, six U.S. premieres and nine Midwest premieres.The Drive-In screenings took place at ChiTown Movies, 2343 S. Throop in Chicago’s Pilsen neighborhood. Even though CLFF is a non-competitive festival, since 1993 the public has had the opportunity to vote for their favorite film in several categories for the Audience Choice Award.

“The end of each Festival leaves us exhilarated and looking forward to the next edition. We are deeply grateful to our sponsors and funders, our volunteers, our staff, our filmmakers, our board of directors and, most of all, to all who attended the three Drive-in events at ChiTown and watched films online, for making this 37th Festival a complete success. And although we are hopeful and confident that we will return to the theaters next year, we will keep using these new tools to bring these fantastic films from all over the Latino diaspora to homes across the Midwest” said Pepe Vargas, Executive Director of the International Latino Cultural Center of Chicago and founder of the Chicago Latino Film Festival.

The winners and runner-ups of the 37th Chicago Latino Film Festival Audience Choice Awards are:

●      Feature/Winner: The Heist of the Century / El robo del siglo (Argentina; Director: Ariel Winograd): In his first heist comedy since 2013’s “To Fool a Thief” (“Vino para robar”), Ariel Winograd recreates what is considered to be the most famous and audacious bank robbery in Argentina’s history. Co-written by the mastermind of the 2006 robbery of a suburban branch of Banco Río, Fernando Araujo (played by frequent Winograd accomplice, Diego Peretti), the film reenacts its planning, execution and aftermath… although not necessarily in that order. Here is quick preview of The Heist of the Century…

o   Second Place: Rosa’s Wedding / La boda de Rosa (Spain; Director: Icíar Bollaín): Actress Candela Peña and director Icíar Bollaín join forces once again in this delightful comedy about a woman who finally learns to say no. About to turn 45, Rosa has spent her whole life trying to please everyone: her employers, her family, her friends, her neighbors, etc. The time has come for her to take charge. She returns to the coastal town of her childhood to open a business and to get married to the one person who truly deserves some love: herself.

o   Third Place: Opposite Direction / Dirección opuesta (Venezuela; Director: Alejandro Bellame Palacios): Luis and Vadier join 17-year-old Eugenia on a road trip in search of Eugenia’s unknown Italian grandfather whose citizenship may guarantee her a European passport and a way out of Venezuela’s political and economic crisis. After a torrid affair, she promises Luis that they will meet in Rome in 13 years. Time passes and the now adult Eugenia receives a phone call reminding her of that promise, one she no longer wants to keep. “Opposite Direction” is much more than a portrait of the Venezuelan diaspora; it’s a story about hopes dashed and restored.

●      Documentary/Winner: Negra (Mexico; Director: Medhin Tewolde Serrano): When she was seven, Eritrean-Mexican director Medhin Tewolde Serrano recalls hearing someone yell “negra” on the street. She turned around to see who that person was talking to, only to realize it was her. That anecdote is the seed for this exploration of what it means to be a Black woman in Mexico. “Negra” tells the story of five Afro-Mexican women from southern Mexico, the racism they face, their processes of self-acceptance and their strategies for transcending the stereotypes Mexican society still has of them. Enjoy this preview of Negra…

o   Second Place: Mothers of the Land / Sembradoras de Vida (Perú; Directors: Álvaro and Diego Sarmiento): Brothers Álvaro and Diego Sarmiento follow five women from the Andes highlands in their daily struggle to preserve traditional and organic methods of agriculture that are centuries old and are in danger of disappearing due to climate change. These women share their insights on the connections between plants and animals, between diseases and what we eat as well as the differences in taste between organically grown food and those following a more industrial method of growing and harvesting.

o   Third Place: Landfall (Puerto Rico/USA; Director: Cecilia Aldarondo): Set against the backdrop of the 2019 protests that led to the resignation of then-governor Ricardo Rosselló, Cecilia Aldarondo’s poignant documentary explores the impact both Puerto Rico’s debt crisis and the 2017 one-two punch of Hurricanes Irma and María had on the island. She visits the spots hardest hit by María and talks to farmers, activists, community and student leaders and families. She also shows a new kind of vulture flying over the island: technocrats and crypto evangelists who see in Puerto Rico a treasure to be plundered.

●      Shorts/Winner: Warren? (USA; Director: Juan Linares): A white-passing Latino despises people who constantly mispronounce his name. When pushed to the limit, he struggles to keep his composure.

o   Third Place: The Silence of the River / El silencio del río (Peru; Director: Francesca Canepa): Young Juan lives in a floating house on the Amazon River with his father, who sleeps during the day and fishes at night. Somewhere in between dreams and waking life, Juan begins an allegorical journey to learn about the power of their connection to the forest and the river.

Born out of the Chicago Latino Film Festival, The International Latino Cultural Center of Chicago also produces other programs, including the Latino Music Series, which will celebrate its 15th edition this year; Film in the Parks, also in its 15th season; the monthly Reel Film Club, already in its 11th year; and many others. All in all, the audience has grown from 500 people in 1985 for the first Chicago Latino Film Festival to more than 60,000 (Latinos and non-Latinos) who enjoy the year-round multidisciplinary cross-cultural exchanges offered by the Center.