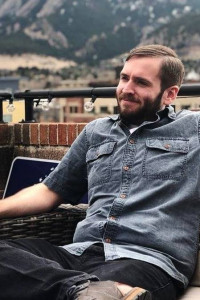 What do Dr. Manhattan, the New York Giants, and the much-ballyhooed ending of Lost have in common? They are all center stage today as 11 Dollar Bill Editor Travis Mitchell answers FIve Questions with SCREEN…

SCREEN: Your best summer vacation ever?

TRAVIS: There’s not a specific summer vacation I remember, just the feeling of summer vacation as a kid. What is in actuality 2 maybe 3 months felt like a year of time off as a kid. Riding bikes wherever, climbing trees, and going to the beach. I don’t think any vacation in my life as carefree as the ones when I was a child.

SCREEN: If you could be any superhero, who would you be?

TRAVIS: I want to say Dr. Manhattan, being able to control anything at an atomic level would be awesome, but knowing the future and everything that will happen would definitely get old. Given that I guess I’d want to be Spider Man, his powers seem like they would be the most fun on a daily basis just swinging around town.

[Editor’s Note: If you are new to Watchmen, here’s a quick debrief on the impressive powers of Dr. Manhattan…]

SCREEN: You can only be a fan of one sports team. Which one and why?

TRAVIS: It’s tough because Football is only 16 games a season, or 17 now, but I’d have to say the New York Giants. They were the first sports team I actually started following and you could say what got me into the greater world of sports. It’s a tough team to follow, we have had a lot of up and down years, but it’s hard not to root for an underdog.

TRAVIS: I worked at a telemarketing company as the IT person, while it wasn’t that bad for me it was a bit soul sucking to hear the conversations people would have and the sales tactics used. I know from the inside telemarketers are the worst.

TRAVIS: Since Lost ended it has gotten a really bad wrap, the ending really made people look at the show a different way, but I’ve always defended it and loved it. It’s obvious they had no idea where they were going with the show, but the way the characters were written felt like they were people I knew and grew close with and I find myself coming back to this show every couple years.

TRAVIS: It’s going to be a cheesy response, but just being around the people I work with at 11 Dollar Bill inspires me. To see how they solve problems or how they edit something gives me so much to think about and add to my own work.

For more from Travis and the fine folks at 11 Dollar Bill, click right here.