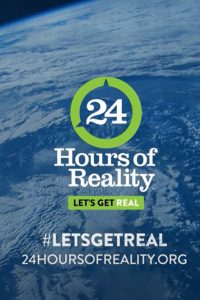 The time is now and the message is clear. Climate activists from around the world call for urgent action to combat climate change in a powerful public service announcement for The Climate Reality Project.

Chicago and Colorado-based post-production studio 11 Dollar Bill leant its support to the project out of its ongoing, deep concern over the climate crisis. “The window to avoid catastrophic warming is closing,” says Managing Partner Lisa Effress, who has worked with The Climate Reality Project on and off for nearly ten years. “Our task was to create a video that would communicate the urgency to act in a hopeful, inspirational manner.”

11 Dollar Bill produced and provided editorial, graphics design and post-production services for the piece, which features personal statements from activists from London, New York, Sydney, the tiny Indian state of Sikkim and dozens of other locations. Speakers evoke the impact of climate change on poor communities, the water supply, extreme weather events and other factors. The piece was produced to promote Climate Reality’s annual 24 Hours of Reality event, held last month, and you can watch it right here…

The studio solicited videos from more than 60 climate activists. The responses were simple recordings with the activists speaking about climate change in their own words. 11 Dollar Bill Creative Lead Erik Tobeler intercut clips from the videos with stark footage showing the effects of climate change. The result is a potent narrative, built around the tagline “Let’s Get Real!” “I wanted to capture the energy and passion of the speakers,” Tobeler explains. Citing a submission from an Arizona activist, he adds, “Living in the desert southwest, she has experienced water scarcity firsthand. Her honesty and personal take on the issue is gripping.”

The quality of video submissions varied widely. Most were recorded in the speaker’s home environment with a cellphone or webcam. Tobeler removed artifacts and adjusted lighting and color to give the piece a consistent look. “In some of the clips, you could hear horns honking or crickets chirping in the background,” notes Effress. “In one, the speaker was recorded standing under a ceiling fan and a shadow crossed her face each time it turned. Erik did a wonderful job in eliminating those distractions while preserving the original character of the videos.” Floodgates Audio provided sound services.

The Climate Reality Project has been sponsoring 24 Hours of Reality since 2011, but this year’s event had special resonance as it followed a report by the UN’s Intergovernmental Panel on Climate Change (IPCC) that issued a “code red for humanity.” “One point that we wanted to drive home is the climate change affects everyone,” Effress says. “We included people from every part of the world, young and old. This piece does a good job of representing everyone everywhere.”